Thanks for visiting the about us page.

We sell a large range of cues and other sporting goods with many new products being added regularly. Linking Snooker & Pool products together was a natural extension of our business model, as it is what we all have in our Lounge Rooms, Game rooms or in the Clubs we visit.

Sharp Global Enterprises also has another site under www.worldcuesports.com.au and others coming soon in other retail areas.

I have Played Competitive Snooker and Pool in Australia, New Zealand and the USA. It is through my personal experience with the game that I sought our products myself before and learned how hard it was to understand how to get quality products.

I researched for years before starting up our own business.  It started gradually and I am proud to say that it is an Aussie Grown Business & 100% Australian Owned & Managed.

We only offer quality products.  We want to be around for a long time and feel that it’s better to sell quality instead of quantity. So anything we sell we first use to make sure it is up to our standards. 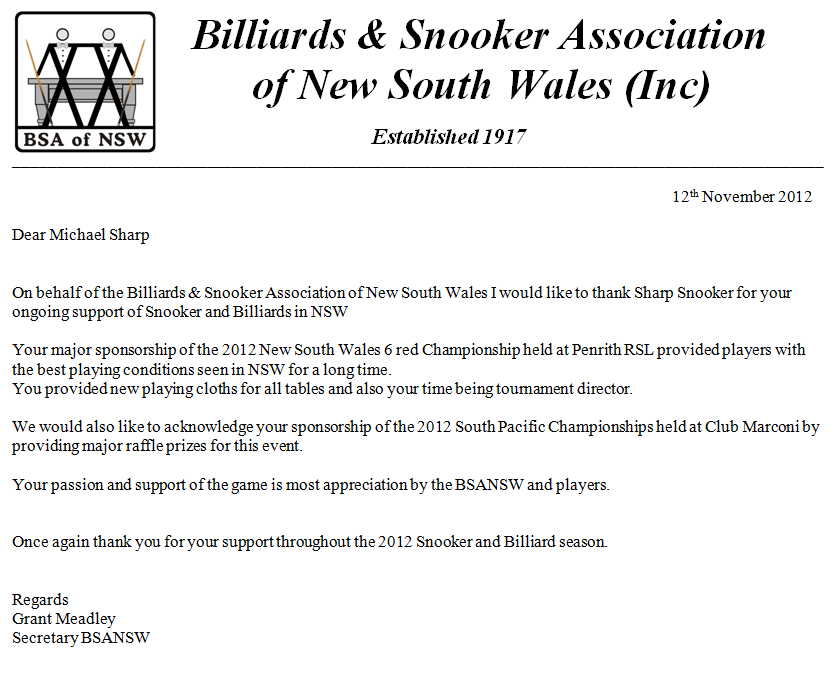 I have had many event wins but this was good to achieve this in 2010.

The tournament highest break (79) was achieved by a new player to the NSW scene, Sebastian Zhang. I think everyone would agree that Sebastian’s performance throughout the event was a cut above the average – as was Patrick Leung’s (semi-finalist), Andrew Samarjia’s (semi-finalist) and, of course, the runner-up Luke Hough, who played his usual aggressive game, making some great memorable long pots.

Well done too all the other players making it through to the quarters : Sebastian (above), Ron Tulloch, Rob Elsley and Ali Ganji.

For the benefit of those players not familiar with the history of this event, it was initiated in 1947 as a major Snooker Championship open only to players who have not yet won a Championship in NSW or Australia. A player can only win it once and it has been won by some of Australia’s most outstanding players:

It is a historically important event carrying some significance. We had 47 runners, however counting players who contacted us late the number would have been well over 50.

A good weekend was had by all players and spectators. Thanks go to Kingsgrove RSL for their generous sponsorship and Ramsgate RSL for allowing us to use their tables for the excess games on Saturday. Special thanks to Bill Hart for managing the event and our referees: Stuart Tait, Richard James, Alex Anson, Steve Brenan and Bill Springett.

Mike, What can I say? You are brilliant!!!! I thank you so much for your amazing service ... I have never dealt with any other supplier of any product online who has even come close to the level of professionalism, approachability, and service that you have provided to me! ....... And please feel free to use this as a testimonial on your site, if you wish to!!! Thank-you so very much for everything!!! Like Arnie said .... "I'll be back" Take care, Kerryn kerryn

Received the ¾ Salisbury the other day and I'm really pleased with the choice. Looks superb and feels great. Thanks for your help in picking the cue. ian obrien

Hi, Just wanted to say Thank You for such a great service! We are very happy with the cues and the entire order. Pleasure dealing with you and look forward to buying more from you again in the future. Have a great weekend! Kindest Regards, Nicole & Wayne. nicole

Great service Mick got the goods from London in five days to my door, how does that happen? Jim bonser

Mate, seriously... I love your service... You're on the money. Appreciate that, You'll see another order come in no doubt. Thanks heaps. ian

I’ve got the Sportube mate thanks for your great service as I got it the next morning! Stephen Lee - World # 8

Thanks Guys, The case looks great and is exactly what I was after. All the best. Henry Chetcuti Henry

Hi i ordered a set of Aramith pro 1g balls on Friday, they arrived 8.15 Monday. I will be recommending you to anyone who will listen. Thanks for great service well done . dave watts

RE: Delivery to USA Hi Sharpsnooker, I received the package, everything looks good. Thanks again for your great service and a quick delivery to the USA. Sam sam

Great job on the tables all the patrons are really happy. Stuart Wilson - Penrith RSL Snooker

Hi mick put your logo on my vest and lots of people saw it and asked about the business, Hopefully it will help in sales for you. Andrew Tucker WA

Hi , Just wanted to send out a quick thanks for all I put you through on the weekend. Also it was a great surprise to get home yesterday and see the goods arrived so fast. That mushroom grazer is sweet and I wish I'd got one sooner. I'll be ordering anything similar from your site for sure without hesitation. Keep up the good work. Cheers, Richard richard

Hi Mick and Sanela, Thank you for keeping me informed of my cue’s journey from England. It arrived on time, and it’s a fantastic cue. Just what I wanted! And thanks for the extras you’ve given me. I will recommend all my snooker mates to your site….a very professional and friendly service. John Levar

I got the snooker balls on Friday afternoon and they’re great. Thanks for the exceptional service. Jerry

Good morning, Just wanted to let you know how well received the aramith balls and case! Thank you so very much for your kind gesture also. My uncle & aunt were thrilled with their 40th anniversary gift! All they need now is the table to play on!!! Kindest regards Liana liana

Hi Michael let me say that I've re-tipped the cue and it's deadly, man, really deadly. I might even get a 100 before the week is out !! Cue is going ok, and I've paid your money into your account . Thank you very much for your efforts Michael. Peter Jackson - Melbourne Referee

I have received my new cue and very pleased with it. I will take some photo's this week and send them to you. Thank you Sam and Mike for putting me correct on the length, spot on. I still love my phoenix unity cue a another very nice cue. Talk to you soon. Mike Ballam mike bLLm

If your after quality by from Mick. He offers quick service and great prices. Danny Townsend Billiards

Wow! Seemed like I'd only just finalised the order when the goods were arriving at my door. Incredible service and products are top quality. I'll be gladly recommending the fantastic Sharp Snooker experience to all friends and acquaintances. Thanks again Mick. Gary Knight gary knight

Hi Mic, The Practice Ball and Magic cloth have just turned up, many thanks for the speedy delivery! Marshall

Hey I love the newbury cue! Putting some frames in with it as I wanna use it in comp next Tuesday. Thanks heaps! Brian Kepu brian

Thanks guys, I received my set of Super Aramith Pro balls about 2 weeks ago. Sorry about the delayed feedback I've been flat out. Extremely happy with the quick postage and great quality product. It's exactly as it was described and they play awesome. I would definitely recommend you guys to others. A+ Cheers Kaleb Kaleb

Hi the Cue and case are beautiful and feels good. Delivery from Peradon to Melbourne was so quick 5 days! Pleasure to do business with u . Look forward to buy more things from your shop. Simon Scerri

Got the cue case and the cleaning cloth = Brilliant! Ta tonnes for your service! 5 star! Orrin Orrin

feedback I promised regarding the g2 tip u kindly gave my colleague to try , he has glowing reports of it 's performance , feel and general cue ball responsiveness , he thks u again , I will have to get one myself next time I purchase . Kind regards Carl Watts carl watts

thanks again for the cue it's perfect, again lol adam fitzgerald

I ordered an iron on Saturday and received it Wednesday morning. What exceptional service. Many thanks. - Jerry jerry

Many thanks for the Black Leather case i won on Facebook didn't even know i was in the running. Nick Waymouth - Newcastle

Hi Sam played with the Lucasi cue and it's Great! can feel the difference already it's great and a quick delivery. Edo

Very solid and sturdy cue, powerful consistent performance every shot. Excellent balance and feel all round and very little if any throw when using side. Stun and screw shots are effortless , highly recommended. adam fitzgerald - gosford

My order arrived on time and with a surprise Phoenix tip - Thanks heaps I will give it a go. Thanks again for the great service. glen

Thanks he is very happy with his new cue and the gift certificate has made him happy and he loves the cue. Great to see my phone call prompted you into a new extension for the site and another idea. Erica 发自我的 iPhone erica

Hi all, Brett Ogle Here, Mick has provided not only the best cues I have seen but other goods such as Strachan Cloth, Aramith balls and a Peradon Timesafe light. The cue was that good I ordered another one for a spare and they had both been custom made at 59 inch’s. If your after quality goods there’s only one place I would recommend and that’s sharpsnooker and cuesforpool. Brett Ogle Golf brett ogle

Thank you it was nice to do business with you looking forward to putting up the Timesafe light. Looks great at Hornsby RSL. regard Joe Saliba joe

Received the Newbury last night and it plays great and getting a lot of interest at the club. Thanks for the quick delivery. David H

Hi Michael, Just a brief note to advise that the peradon brush and the stubby extension have arrived safe and well.Thanks for the prompt service as usual. Tad Babiak - Adelaide

Hello there, Received out ¾ Salisbury the other day and I am really pleased with the choice. Looks superb and feels great. Thanks for your help in picking the cue. ian obrien

The sharpsnooker.com.au and cues for pool are very organize, helpful and professional to there clients. I got my first used pool table and Michael gave me all the details I needed to know for the pool maintenance, honest opinion and what sort of accessories I should use. The sharpsnooker.com.au got all the high-end products for pool and billiards and cheap price compare to other websites. You are safe here! rodel

This popup will close in:

We're moving all products to

We've decided to merge SharpSnooker.com.au with our main website WorldCueSports.com.au in order to offer everything under one web domain.

Of course you're still welcome to place orders on this website, they will be processed as usual.

Meanwhile we're migrating products and thus it's possible that you may be redirected to World Cue Sports if you visit certain pages.